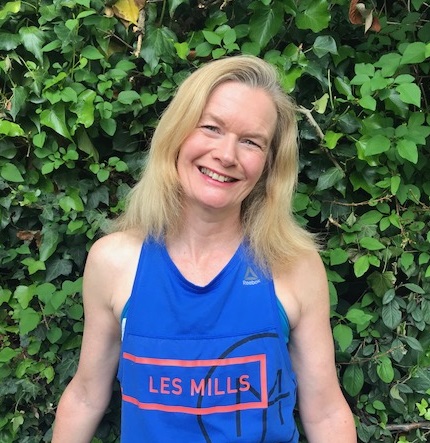 Besides my new role at the Hogarth, I am a self-employed fitness instructor teaching Les Mills Bodypump and Grit at clubs across London. I also do regular cover teaching for many major clubs including Nuffield clubs in Wimbledon, Moorgate and Paddington, VA Strand, VA Notting Hill, Fitness First Hammersmith, David Lloyd Fulham and Daleyfitness.

I am excited to be launching a new evening 6pm Bodypump class at the Hogarth!

LES MILLS Advanced Instructor in Bodypump (AIM2) and Grit (AIM1) and preparing to film for Elite status in Bodypump later this month.

I am a Cambridge University graduate with a Joint Honours degree in French and German. I worked for ten years as a journalist, including over two years working in Amsterdam before becoming a full-time mum. I’m married  to Hamid with two daughters Emily (20) and Lucy (16) and live in Putney.

My passion for fitness was kick-started around five years ago when I discovered Les Mills and the world of Group Exercise. From an occasional gym user who had become overweight since having children, I soon became hooked, starting doing more and more classes and  losing three stone in two years. I also discovered Hiit Training, running and yoga, doing these alongside Les Mills Bodypump, Grit, Bodybalance and CX Works classes. I decided to train as a fitness instructor after attending Les Mills Live events in London and Manchester and realising I would like to share my passion for fitness and help others to do the same. I’ve not looked back since!