It was a barmy 26 degrees today and we all know how hot the squash court gets? Had Tim G turned the heating off this week? Yes he had. Still, Jack and Jason were knocking up and the ball was flying around like a golden snitch.

Jack won the toss and opted to serve.

In the first few points of the first game, as Jack followed through and Jason rushed forward, Jason managed to get caught by the end of Jack’s racket just above his eye. Play stopped for a minute or two while Jason assessed the damage and regained his composure. There was a small lump above his right eye but it wasn’t enough to impede his vision. First blood Jack, well nearly!!!

The first 5 to 10 minutes were spent testing each other and hitting the ball as hard as they could. Jason hit a couple of lovely drop knicks and went ahead 6 points to 3. Jack regained serve but then handed it back to Jason who quickly took the next 3 points and with it the first game 9 points to 3. 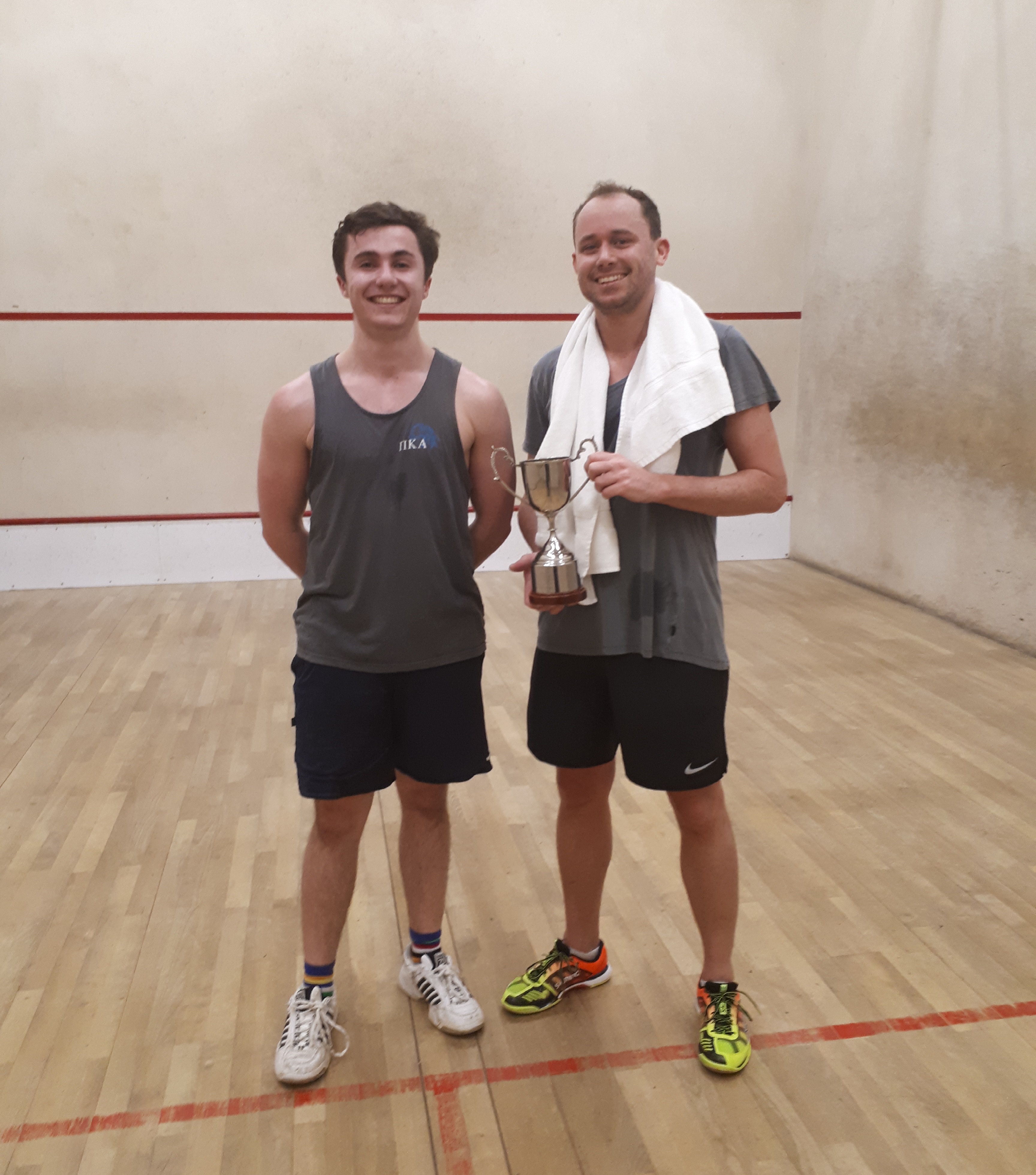 Jack took a little longer to come back from the break and was showing some signs of fatigue! Once again, the ding dong of service changes went backwards and forwards with a few points being conceded by each opponent. Jack hit a golden patch and took 4 swift points to go ahead by 5 points to 4. It looked as though Jack might be in a position to take the second game and level it. Jason had other ideas. There were a couple of long rallies which taxed both players but at 5 points each Jack asked for a toilet break and went off court for a couple of minutes. Jason had been resting and was looking even more determined now. He went ahead by 7 points to 6 but then Jack got second wind and pulled it back to 6 points to 7 before making an unforced error. More rallies with no changes in score ensued until Jason edged ahead 8 points to 6 and then took the game with a mis-hit from Jack – 9 points to 6.

What was going to happen in the third? Did Jason have the bit between his teeth and was going for the kill or did Jack want to spoil it and steadily stage a comeback?

Jason went 4 points to 0 up really quickly and took charge very early. Jack was faltering. Service changed hands 10 times but Jason always looked in control. Jason went 5 points to 1 up and then hit a purple patch and was 8 points to 1 up. This was now the perfect opportunity for Jack, a young 23 year old to turn the tide, use his young legs to come back and take the trophy. Jason, pushing 32 years of age was serving for the match and was having none of it. However, Jack hit a perfect drop shot and was now serving at 1 point to Jason’s 8. This was it, time to reverse the score and get back in the driving seat. Experience won over age and Jason drilled the ball past Jack to the back of the court where it died. Jack was clearly tired and Jason knew it. He took the next point and became Hogarth Squash Champion of 2017.

Nick, Jack’s Father was on the balcony and let us into a little secret. Jack was on the way home last night when he bumped into an old friend on the tube, they got talking, went for as drink and the rest, apparently, he threw up during his ‘toilet break’ in the second game! Awsum preparation for a Squash Final the next day. I wouldn’t expect anything less of a seasoned squash player.

Well played chaps, it was very entertaining. It was also a pleasure to have Colin, founder and Chairman of the Hogarth Group and previously an international squash player himself, on the balcony watching and commentating for supporters who were watching but did not fully understand the rules.

Time to get training for the next tournament everyone!