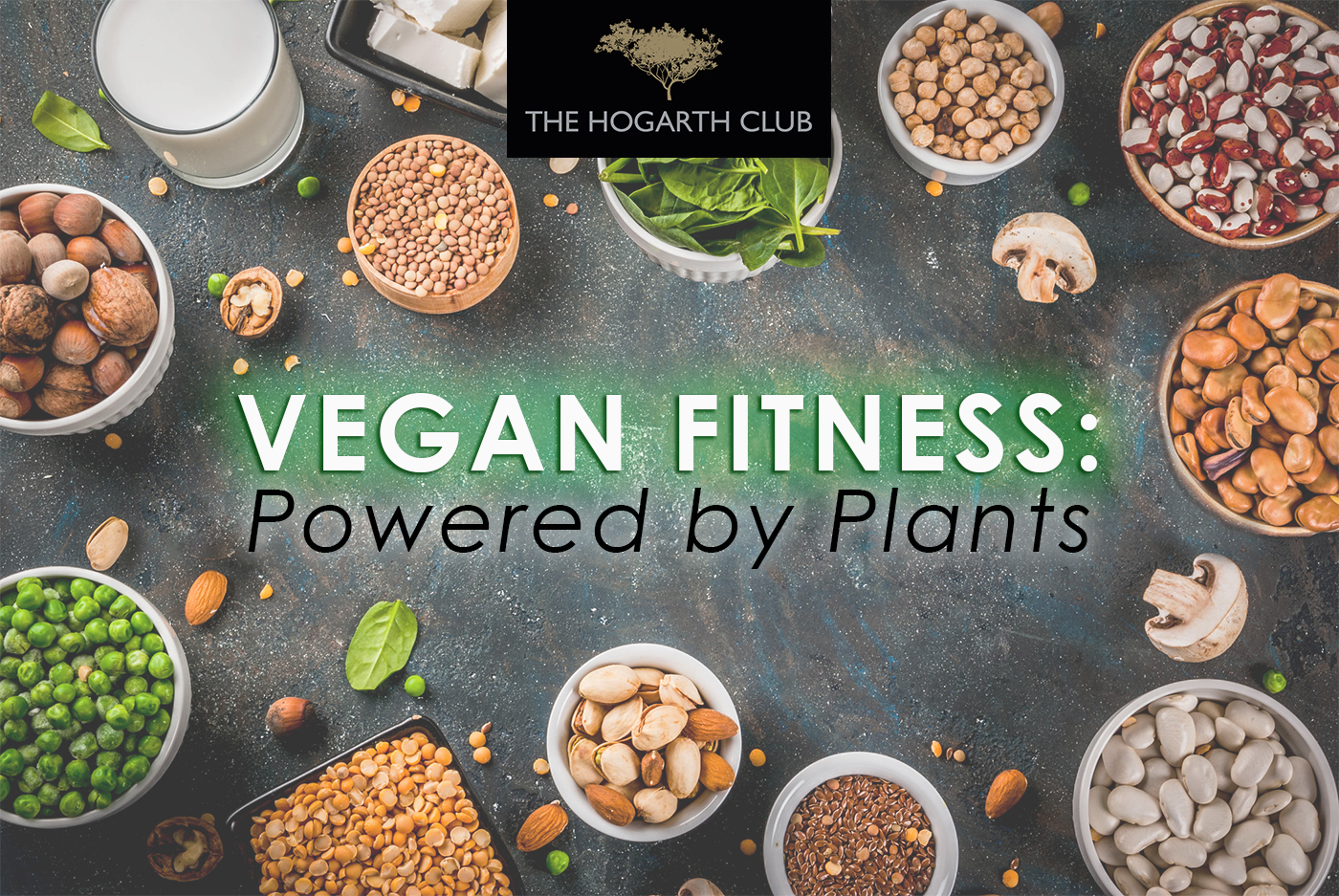 Once considered an extreme lifestyle choice, veganism is continuing to experience rapid growth in popularity in the UK. But is veganism right for the average person? What benefits does it provide to your fitness and well-being? I became vegan in 2016 and have outlined below some of the most interesting talking points and myths around veganism, as well as some of my own experiences, including:

• Are you more or less hungry between meals?

• Why cheese could be considered dairy ‘crack'

• Chocolate is on the menu and it’s actually good for you!

Veganism is one of the fastest growing lifestyle choices in the UK and is attracting a lot of attention in the media and in the fitness industry. There are more than half a million vegans in the UK now and this is predicted to significantly increase. And whilst veganism is on the up in Britain, a meat-free regime is becoming increasingly popular among leading sports stars including… 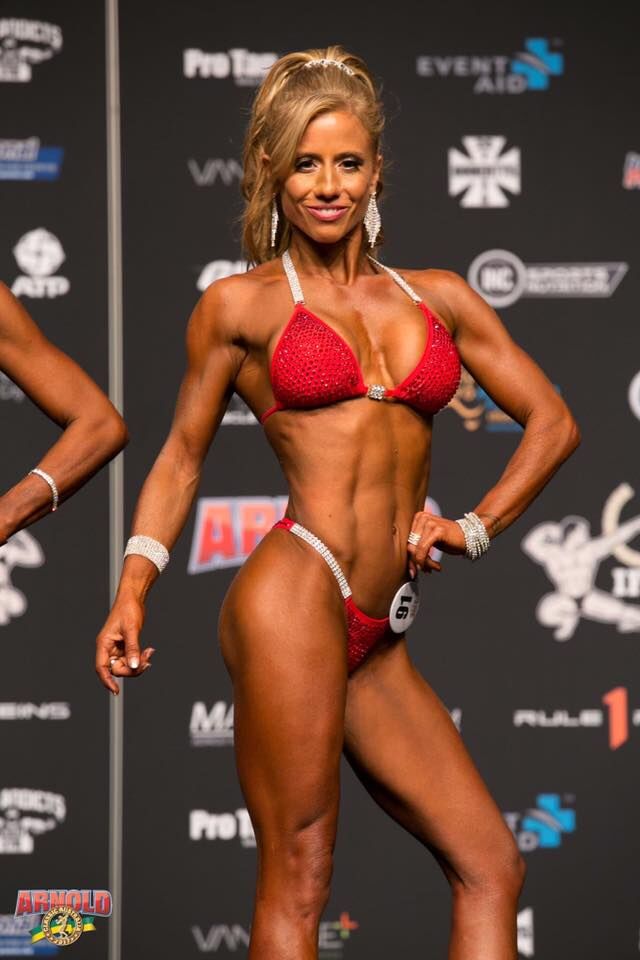 These athletes are at the forefront of changing attitudes towards food and exercise. Proving that you can be fit and healthy on a plant-based diet and go against the long-held belief that you need to eat large amounts of chicken and eggs to bulk up or slim down.

At the same time, documentaries like Cowspiracy are raising awareness of the negative effects of meat production on the environment. This Netflix cult classic is a hard-hitting approach holding animal agriculture and our individual food choices responsible for more than 50 per cent of human-caused climate change. And has helped raise some interesting questions about how our meat-eating habits on the planet are contributing to its destruction.

There may be many reasons why we are starting to see a significant shift towards a more plant-based approach to health, wellness and sports performance, but what is clear is that veganism is on the rise and shows no signs of slowing. Around half of Britain’s 1.68 million vegetarians now say that they want to reduce their consumption of animal products. And amongst those that may not be more meat free inclined, attitudes are seemingly changing. 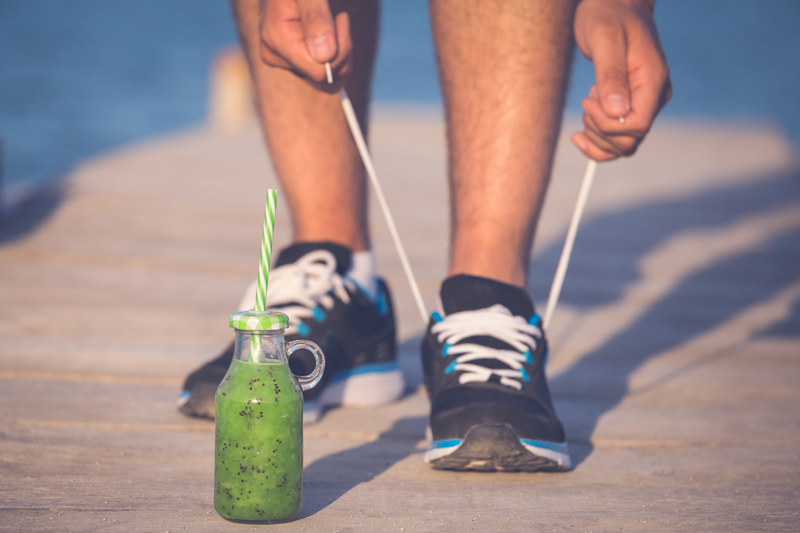 Veganism isn’t cast in quite the same light anymore. And as awareness is rising, public perception of veganism is changing fast. It’s no longer considered such an extreme lifestyle. It’s easier and more accessible and it is much more the ‘norm’ now to walk into a supermarket and find a decent range of dairy-free milks and other vegan-friendly products. But, there is still a lot more work to do on educating people around the health and nutritional benefits of going plant based…

Vegans tend to eat more veggies and fruit which are full of fibre and hold water, so a good plant- based meal (if balanced right) is very likely to be satiating. Eating beans and legumes are also big on the food agenda for vegans and these are healthier carbs that can help you feel fuller for longer, without the overly sluggish or ‘heavy loaded’ feeling you may get after eating a meat-based meal. So, all in all, if you focus on eating the most nutritionally dense foods, and make sure each meal is well balanced, your body generally won’t crave more food. And there is far more choice out there now for things to eat. But if in doubt, there are also now a ton of healthy vegan snacks to stock up on for when you’re ‘on the go’ or for in between meals. And a bit of preparation and planning goes a long way. 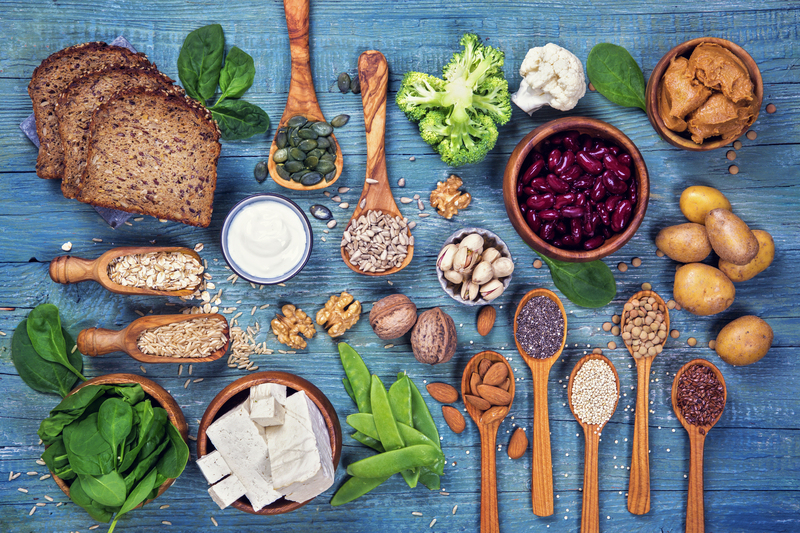 How do you get your Omega 3s?

Eating fish oils isn’t the only way to get these essential fatty acids that are so critical for our bodies. In fact, Alpha-linolenic acid (ALA) a type of omega-3, is found in plentiful amounts in plant sources such as soy, walnuts, chia, flax, and hemp seeds or in their oil form. (Oils are still processed foods of course, so it’s always better to go straight to the natural source where possible).

Where do you get your calcium from?

There are a few different ways to get calcium that are great alternatives to cow’s milk and cheese for eg, calcium-set tofu, calcium-fortified milk (eg. hemp, oat, almond, soya), plant based yoghurt alternatives and bread fortified with extra calcium eg. Burgen Soya & Linseed.

To put this into context, about 400ml or just under two cups of calcium-fortified plant milk, provides roughly two thirds of an adult’s recommended daily intake of calcium, and 100g of calcium-set uncooked tofu can provide half of an adult's daily needs.

But don’t you miss cheese?

Some do. Some don’t. Personally, I did. But only for the first two weeks which was like going through ‘withdrawal’. This is because cheese is actually addictive. And like sugar, when eaten our opiate receptors in the brain are stimulated and dopamine (the pleasure chemical) is triggered, which in turn creates a sense of craving. This is the reason we often find it hard to stop once we start attacking that cheese board, and always manage to squeeze in another slice of pizza.

Cheese contains casein which is a diary protein that breaks apart in the digestive tract and is a form of opium. It goes into the blood, attaches to the same receptor that heroine attaches to and makes you feel good. It is effectively dairy ‘crack’ and aside from being loaded with calories and cholesterol, it’s linked to digestive problems, prostate cancer and often arthritis. But health benefits aside, the truth is once you get through the withdrawal period (if you experience it) after a few weeks you just get over the craving and crack on (so to speak).

We’re probably pretty familiar now with the addictive effect of sugar, but sugar + fat has a massive opioid affect - just think of how it feels eating a donut. But probably less known is the fact that blood in meat contains albumin, haemoglobin and gamma globulin and all of these chemicals activate opioid receptors. In a study in the US, when meat eaters were treated with a drug used to block opiate receptors, ham consumption fell by 10%, salami by 25% and tuna by 50%.

Gliadin is a protein in wheat that has opiate activity and is sometimes referred to as gliadorphin. There is also a protein in rice that produces similar effects. So, if you can't stop reaching for the bread bowl or find yourself ploughing away endlessly at that stir fry, it's most likely because you’re in a feel-good chemical trap.

Being vegan doesn’t mean you miss out on treats. And when it comes to chocolate you just eat the dark kind, which is also better for you. No dairy, often (but not always) less processed, and closer to chocolate’s original source, particularly if you go for organic or raw.

Dark chocolate is loaded with nutrients that can positively affect your health. Made from the seed of the cocoa tree, it is one of the best sources of antioxidants on the planet. Studies show that dark chocolate (not the sugary crap) can even improve health and lower the risk of heart disease. So, the upshot is, if you buy quality dark chocolate with a high cocoa content, then it is actually quite nutritious: rich in fibre, iron, magnesium, copper, manganese amongst other minerals.

So where do you get your protein from?

There are a few ways to avoid meat and eggs and still get your intake of quality protein. Ranging from millet, buckwheat, oats, quinoa, rye, amaranth… 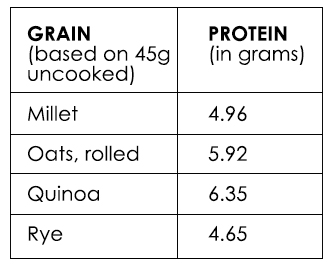 Beans, peas, lentils and pulses are also typically low in fat, contain no cholesterol, and are high in folate, potassium, iron and magnesium. They also contain beneficial fats and soluble and insoluble fibre, so a good source of protein, and a healthy substitute for meat.

Non GMO tofu and tempeh are also great sources of vegan protein, as well as hemp and chia seeds which can easily be chucked into almost anything including smoothies, salads, soups, or even sprinkled on toast. The truth is, we worry so much about getting enough protein, but tend to eat more than we think.

Protein Myth No. 1: You Can’t Get Enough Protein From Plant-Based Diets

In fact here are five benefits of eating plant-based proteins:-

High levels of saturated fat in the blood raise cholesterol and contribute to clogged arteries. If your diet is rich in saturated fats (found mostly in meat, dairy and eggs), you are more likely to suffer from heart disease in the years to come. Unsaturated fats (eg. found in nuts and seeds) are the alternative and help to keep your heart healthy.

2. Free of the growth hormones and antibiotics found in animal proteins

Modern meat production uses growth hormones and antibiotics. This will always be a major topic of discussion and while you can find antibiotic and hormone-free meat, plant-based proteins are the best option to avoid this altogether.

A good indicator of whether a food is alkaline-forming is the presence of chlorophyll – ie the greener the food, the better. The typical North American diet is acid-forming (meat, white bread etc) which is not helpful in maintaining your body’s naturally alkaline pH. Adding more alkaline-forming foods with a plant-based diet can help you combat inflammation, reduce stress, and protect bone health.

Whole plant-based foods, especially those that are raw, are easy for your body to digest. They contain fibre, which is crucial to proper digestion. And less time spent on digestion means more energy to use throughout your day.

5. Better for the environment

We all hopefully want to reduce our personal carbon footprint. Diet affects the environment even more than your commute. Because it takes more water, energy and fuel to produce animal products, switching to plant-based foods offers the planet less harmful consumption and has a huge environmental impact. 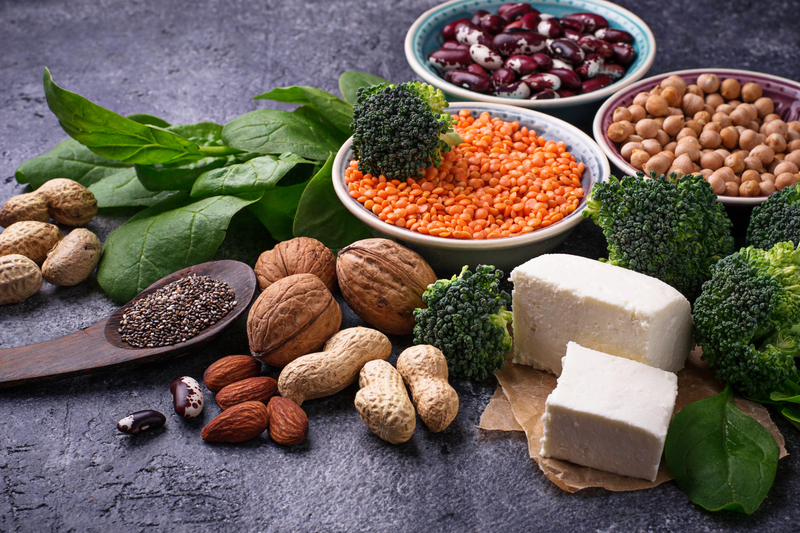 BUSTED: Oh yes they are (well some of them anyway)

Chia is not only a complete protein, but like flax seeds chia seeds are very high in Omega-3 fatty acids. In fact, chia seeds contain more Omega-3s than salmon gram for gram.

Protein Myth No. 3: Animal Protein Is The Only Protein That Builds Muscle

BUSTED: Athletes of all types can build incredible muscle strength and bulk with plant-based proteins

When we consume protein, our body breaks it down into amino acids to be used for a number of important processes including muscle protein synthesis. The main amino acid that is used for stimulating this process is leucine and can be found in many protein sources. But like carbs and fats, not all protein sources are made equal. Some contain higher levels of leucine and the other eight essential amino acids that we need to get in our diet.

Having said that (and surprising to some), this doesn’t mean we need to default to eating meat. With a well-balanced, protein rich plant-based diet, we can happily consume enough of the good stuff to meet our leucine threshold, put our body in an anabolic state, and build muscle.

The upshot is it’s about choosing the right kind of protein that can help you build and sustain muscle including wholefood, alkaline-forming sources like plant-based proteins found in sprouted nuts, seeds, or pseudo-grains (to name just a few). And with the right mix of plant-based proteins eaten throughout the day, not only will you be getting in some complete proteins, but you’ll eating proteins rich in antioxidants which help to reduce the inflammation caused by exercise, helping you to recover faster from your training. 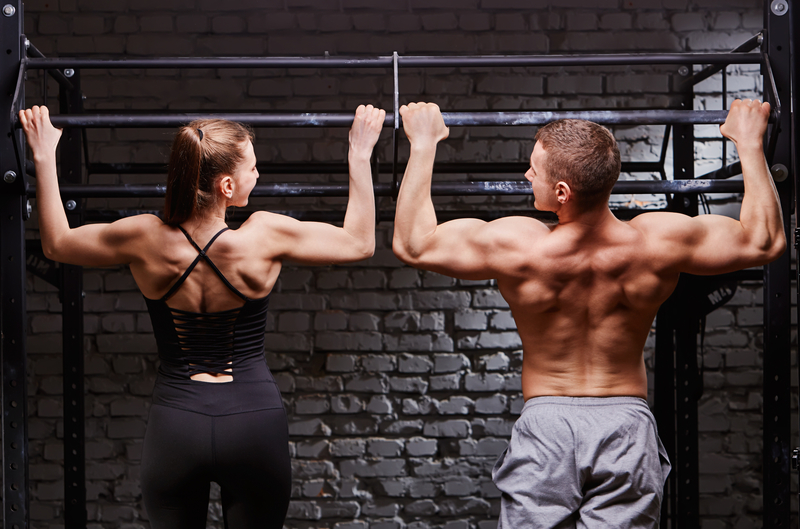 If you’re interested in going plant based or want to know more about how you can maintain your training with a vegan diet and/or just keep your energy levels up. Or if you just want to discuss vegan nutrition, please get in touch. I’d be more than happy to chat!

Written by Yildiz Atan - Personal Trainer at The Hogarth Club